The Foundation staff works to inspire, support, inform, listen to and collaborate with the people and organizations of Greater New Haven to build an ever more connected, inclusive, equitable and philanthropic community. 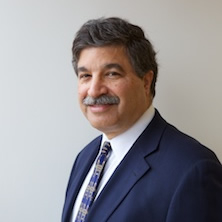 Will Ginsberg has served as President and Chief Executive Officer of The Community Foundation for Greater New Haven since 2000. For Will, this work is the culmination of a career devoted to community issues, as he has worked at the local and national levels in community economic development, community banking, and community philanthropy.

Mr. Ginsberg serves on the boards of numerous organizations including New Haven Promise, Yale-New Haven Hospital, ReadyCT (formerly the Connecticut Council on Education Reform), and the John B. Pierce Laboratory and Foundation. In 2011, Mr. Ginsberg received the Community Leadership Award from the Greater New Haven Chamber of Commerce, the community’s highest recognition for lifetime civic leadership.

Mr. Ginsberg served in the Clinton Administration from 1994 to 2000. He was nominated by President Clinton and confirmed by the Senate in 1994 as Assistant Secretary for Economic Development in the U.S. Department of Commerce, and served in 1995-6 as Chief of Staff to the late Secretary of Commerce Ronald H. Brown. Following Secretary Brown’s death, he served as Managing Director and Chief Operating Officer of the Federal Housing Finance Board, the Federal regulatory agency for the twelve regional Federal Home Loan Banks, from 1997-2000.

Mr. Ginsberg lived and worked in New Haven for a decade before going to Washington. As Development Administrator under Mayor DiLieto from 1984 to 1988, he was responsible for all development-related activities of New Haven’s municipal government. Ginsberg was President of the Science Park Development Corporation, a non-profit inner-city technology economic development entity, from 1988 to 1994.

Mr. Ginsberg graduated from Columbia Law School in 1980 and practiced law in New York City from 1980 to 1984. He graduated from Trinity College in 1976. He has been married for 42 years to Ellen Kelly Ginsberg, who recently retired as the director of Yale University’s liaison office with Asia’s first western-style liberal arts college, a Yale collaboration with the National University of Singapore. Will and Kel live in New Haven. They have two grown children and three adorable grandchildren.