Edward A. Bouchet became the first Black American PhD, just twelve years after the signing of the Emancipation Proclamation. The Promising Scholars Edward A. Bouchet Scholarship honors his legacy.

(A brief history with informatin provided by the Beta Tau Boulé): Edward A. Bouchet grew up in New Haven, the son of a man-servant to a white Yale student. His father also worked as the sextant at the old historic Dixwell Avenue Congregational Church. At a young age Bouchet was an outstanding student and was accepted into the current Hopkins Day School, where he graduated first in his class.

The long-standing tradition at Hopkins was to have the valedictorian speak at the graduation ceremony – But Bouchet was not allowed to speak.

In 1870, Bouchet enrolled at Yale College and was one of the first Blacks on campus as a student. Enduring four years racism from fellow classmates at Yale, he went on to finish first in his class. He was awarded highest honors and was nominated and initiated into Phi Beta Kappa. But he was again denied a speaking role at the graduating ceremonies.

In the fall of 1874, Bouche returned to Yale with the financial support of a Philadelphia philanthropist, Alfred Cope. In 1876, Bouchet successfully completed his dissertation on the new subject of geometrical optics, becoming the first black person to earn a Ph.D. from an American university, and just the sixth American of any race to earn a Ph.D. in physics.

After his studies at Yale, Bouchet pursued a life of teaching.

History of the Scholarship

In 1987, the Beta Tau Boulé established the Edward A. Bouchet scholarship to support promising college-bound African-American students from Connecticut. The Boulé is the New Haven-based chapter of Sigma Pi Phi, the Black fraternity of cultural and professional leaders that dates to 1905 with members including W.E.B Dubois, Martin Luther King and Barack Obama.

A founding pillar of the fraternity is to "Provide leadership and assistance to enhance and elevate the under-served Black community from which many of them came and in which many of them professionally existed." The Boulé founded the scholarship in recognition that it was usually a great education that had lifted most of their members out of a cycle of poverty and into the professions.

In 2022, two new scholarships were established in honor of Miss Anna Louise James, the first woman pharmacist in the state of Connecticut.

Scholarship award winners from past years 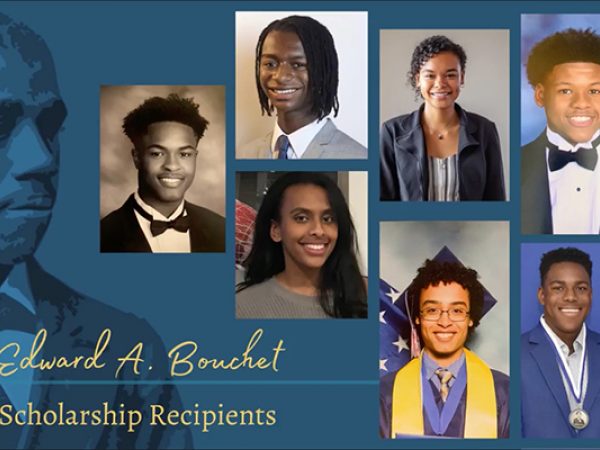 Despite Pandemic, the 2020 Awards Ceremony gathered scholars and mentors for a virtual celebration.

Reflections on Edward A. Bouchet

Boule member Dr. Curtis Patton speaks at the 2014 award ceremony about the life and lessons that can be learned from Edward A. Bouchet.